As we celebrate our 107th year at Monroe Systems for Business, we thought it would be fitting to speak with Monroe’s former CEO, Dick Roberts, to learn more about how he got his start, his role as a product planner for Monroe’s printing calculators and some of the top innovations he has seen and implemented during his 44-year tenure with the company.

From the Clothing Industry to Printing Calculators

Dick Roberts had things all planned out. He grew up working for his father in the retail clothing business and had planned to continue working in that line of business. That was until life dealt him a different hand.

“I had originally planned to go to work for Levi Strauss, but the job required that I go to Brazil,” recalls Roberts. “I was more than happy to do that, but said that I only spoke Dutch, German, and English, and did not speak Portuguese, so that would be a learning curve. They agreed and told me to get sales experience on the road for a year, and then to come back and they would place me somewhere in the U.S."

Taking that advice to heart, Roberts answered a newspaper ad from Monroe and applied for a sales trainee position at the company’s Portland, Ore., branch office in 1971.

“I knew how to work a cash register, but that was the extent of any knowledge that I had about machines at that time,” he notes. “I went on the interview, and Monroe hired me right there.”

At that time, Monroe had many locations throughout the U.S., as well as in other countries. Monroe’s corporate office was in Orange, N.J., and the company had 360 branch offices (which included sales and service) in the U.S., a manufacturing plant in Lexington, S.C., subsidiary offices in Canada, Holland, Hong Kong and Venezuela — employing roughly 1,200 individuals. Monroe's method of distribution in the U.S. was through its branch offices.

Roberts says that anyone that was hired by Monroe was required to learn adding machines, calculators, and about the businesses that used those instruments.

“It was expected that Monroe representatives be able to explain how the calculators would benefit customers in a variety of industries, along with the features they would use in their daily workflows,” Roberts explains.

Mechanical is where life began for the calculator. A numeric entry would be accepted after the operator physically moved a hand crank forward for addition and backwards for subtraction. Most of those products were also full keyboard products, which meant the keyboard consisted of 11 rows of numeric keys across by 10 rows high. (11111111111111, 22222222222222 etc.)

Electro mechanical meant the adding machine/calculator was powered by electricity, but only to the extent that the manual hand crank was replaced — a motor was used for the propulsion.

According to Roberts, the 1220 was revolutionary because it set the standard for all other Monroe calculators to follow.

“From the functional attribute standpoint, all of those features on the 1220 at the time were innovative. It was the first calculator to feature an enclosed paper roll, a Monroe trademark.”

The enclosed paper roll is one of the most significant advancements in Monroe’s history because it prevents the paper from accumulating dust and dirt, which would otherwise be advanced into the printer and cause irreparable damage to it.

“Other features on the 1220,like add mode — which replicated an adding machine when adding and subtracting by automatically placing the decimal point for dollars and cents — and the separation of the adding machine and calculator, were also innovative,” adds Roberts. “Those features were designed specifically to mimic the operation of electro mechanical products, thus making the transition to electronics smooth and intuitive for our customers.”

About a year after the introduction of the 1220, Monroe introduced the 1300 series. 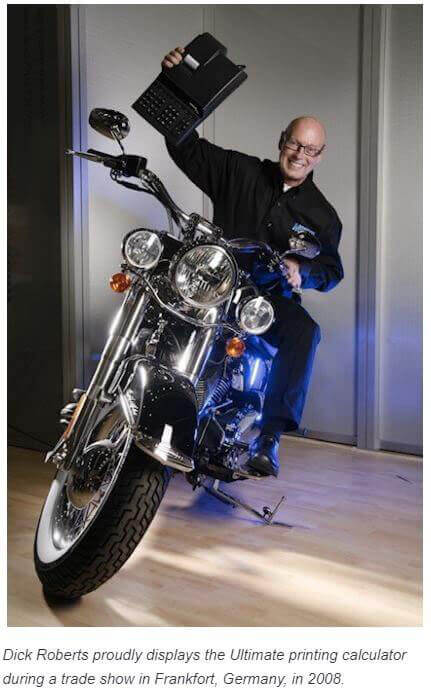 Roberts says that these programmable calculators allowed Monroe to dive deeply into the specific computational jobs of its customers.

“Initially sales representatives would spend hours working with customers to learn their job (from a calculation standpoint), then would write a program, transform the program to punched cards that could be read by the calculator, then work with the customer to fine tune the finished product. We called those programs ‘applications.”

In 1974, Roberts was promoted to the product planning department. As a product planner, he was involved with the planning of every Monroe calculator since 1974 and the only planner since roughly 1976.

Part of this role involved identifying new industries, like check cashing, and developing innovative programs and tools specifically geared towards that industry.

Initially assigned to non-programmable, Roberts was tasked with replacing the 1300 series with the 1400 series. “Thus, began the incorporation of exclusive features that you see in Monroe calculators today,” says Roberts.

Soon after, Roberts’ role rapidly expanded, and he soon found himself in charge of the Product Planning department.

“While still dreaming up the characteristics of our non-programmable products (for both domestic and international divisions), I was also assigned to manage the development of Monroe's magnetic stripe ledger card computer, code named Simon, which later became the 7860. During this time Monroe was also developing a personal computer, introduced in New York at the Plaza Hotel (one day after IBM announced their PC).”

According to Roberts, the scope of Monroe's calculator products in the mid to late 1970's was extensive. “Companies like TI and HP could easily find the mold for their educational products in Monroe, as could others with computer programs or handheld devices specializing in lending, engineering, surveying, HVAC, fixed income securities, etc.,” he explains.

Throughout his career with Monroe, Roberts says that his first love was the ability to demonstrate how a Monroe calculator was best suited to a customer's specific job.

“That came from having first-hand knowledge of that customer's computational/application needs — which falls in line with Monroe's primary distribution philosophy (selling directly to the actual end user). Monroe has always differentiated itself by being the first to come up with something in many instances.”

Watch this video of Roberts as he explains Monroe's past and looks at the Monroe Ultimate printing calculator.

On the international front, Roberts was also involved in the movement of manufacturing of Monroe's calculators to Japan, Thailand and Malaysia.

“In the 1980's and 1990's my responsibilities expanded to Project Management (development of software for Monroe's PC) and the incorporation of shredders to Monroe's product portfolio,” he notes. Roberts’ other responsibilities included product planning, marketing, and handling national accounts. Roberts says that the only product line he wasn’t involved in were copiers.

As a testament to the power of Monroe's calculator products, many large financial institutions approached Monroe to license the lending algorithms for their banking platforms. Monroe's Bond Trader was considered the standard in fixed income securities trading and its algorithms are still used today. For many years, Monroe worked with H&R Block, an American tax preparation company operating in North America, to write specialized software for our Programmable Calculators to prompt their accountants through the completion of 1099 forms.

In 2008, Roberts partnered with Industrial Designer Josh Owen to design the Monroe 8125 printing calculator with an enclosed paper roll. The goal of the 8125 was to create a model that would take up less desk space but offered the complete functionality of a medium-duty calculator. The result was a product that was 30% smaller than other models and featured a translucent green or grey paper roll cover.

“The idea was to basically depart from the standard look of a calculator — to make it something truly revolutionary as opposed to evolutionary,” notes Roberts. “To that end, we even explored the idea of having a pen and the pen would affectively display a keyboard illuminated on a desk, whereby you would use the illuminated keyboard on the desk like an adding machine or a calculator.”

Another idea for a design, Roberts says, was to have a clam shell calculator much like an iPad folded in half, then through wireless technology, connect that to a printer, and that device could effectively replicate functionality of Monroe’s programmable calculators, its non-programmable calculators, and have a display screen that would enable the user to audit a lot of their work.

“For example, he says, if you were doing a mortgage loan calculation, it would allow you to see many factors that would be associated with the entry of that loan.

While Roberts admits that some of those ideas may have seemed far fetched, those ideas resulted in toning back and trying to design a calculator that would occupy the smallest footprint possible while still enclosing a paper roll.

“Adding to the small footprint would, of course, be all the functionality that anyone would expect to see on our highest-end calculators and basically redefining the price point to basically look like a medium-duty calculator,” he points out.

It All Leads Up to This — The Monroe UltimateX Calculator

In 2016, the UltimateX12-digit programmable heavy-duty accounting printing calculator was introduced. “The reason this model is called the UltimateX is because it has the functionality that preceded it, as well as the functionality that was never seen before on a desktop printing calculator that would be used by accountants and CPAs,” Roberts notes.

From a functionality standpoint, Roberts says that almost everything that is featured on the UltimateX was a first in the realm of calculators. Some features that are unique to the UltimateX are Individual Keyswitch Technology or IKT (a favorite among touch operators because it provides the lightest keytouch available), editing and reprint capabilities (the only calculator in the industry that can edit and reprint tapes and entries up to 99 lines), and its hidden storage compartment for a spare paper roll and a twin-spooled ribbon.

“Most calculators that would have such functionality had to be programmable, and they'd be far more expensive and would not necessarily be readily available to the accountant world that we were targeting,” he explains.

Steering Monroe’s Growth and Innovation for the Future

During his 44-year tenure, Roberts was deeply committed to Monroe’s financial strength, enabling the dedicated employees of Monroe to have a lifelong career at the company. Through business transactions and by acquiring additional products outside of the printing calculator scope, Roberts positioned the company for much success.

Some of the most significant transactions made during Roberts tenure were:

1. In 1984, Litton Industries sold Monroe to Jeffry M. Picower. During the period of Mr. Picower’s ownership, the company’s focus shifted to maximizing the potential of the office copier market.

3. Sale of Monroe to Carolina Wholesale Group in 2001, which is our current ownership.

Roberts says that he owes much to Monroe and to the thousands of employees and customers who have contributed to his success and that of Monroe’s success over the years. “For as much as I can personally take credit for many of the products during my 44-year tenure, it was our customers, customer service staff and our sales representatives at Monroe that provided the feedback to make our products successful,” he concludes.