It takes but a glance to recognize a Monroe heavy-duty calculator from any other calculator made. The sleek and stylish Monroe UltimateX looks great from any angle. But take a closer look at a comparison between it and another well-known brand. 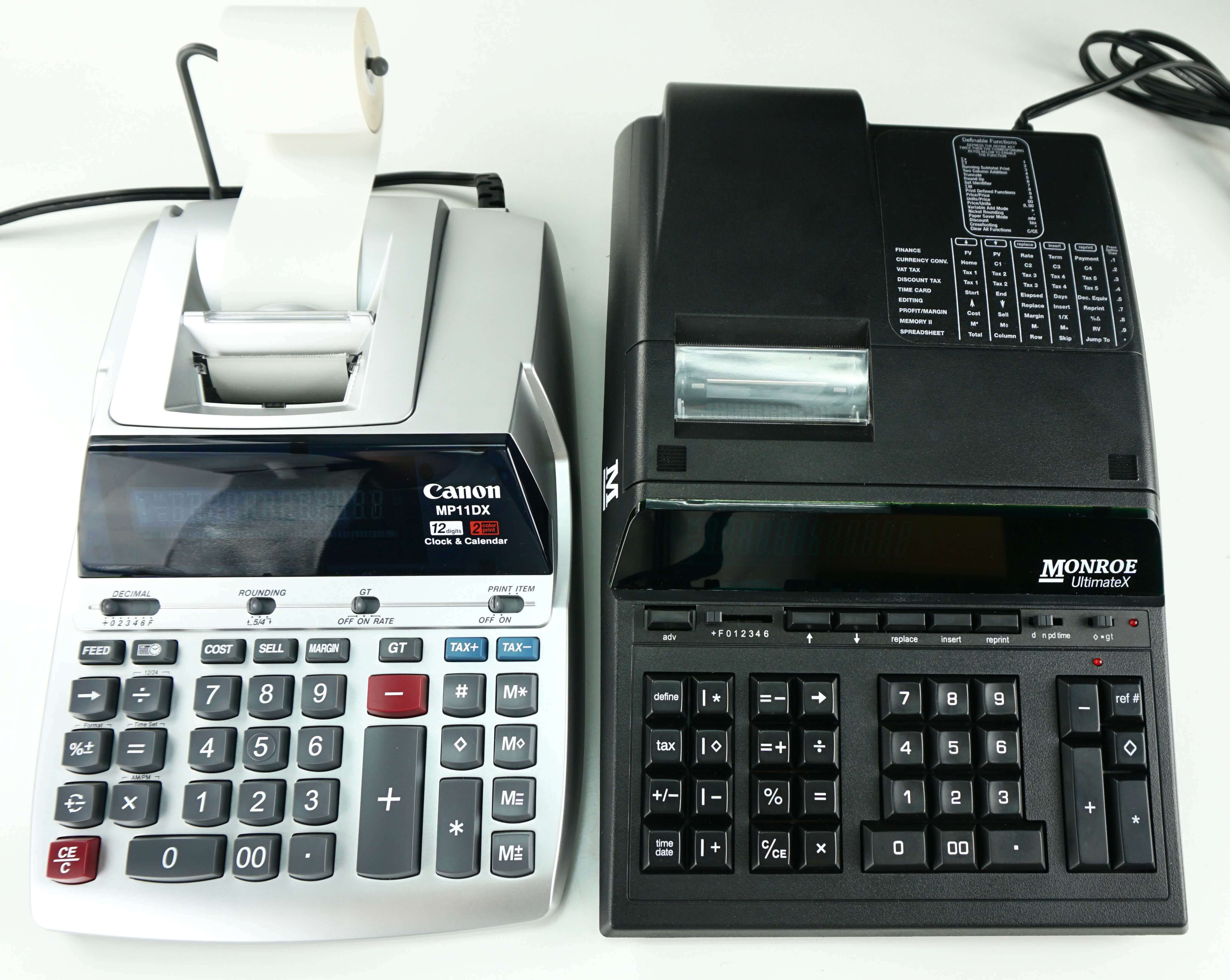 Can you spot the difference? Obviously there are many that could be described over several hours, however let’s save that for later when we take a deep dive into functionality. For now, you likely noticed that the paper roll is hanging off the rear of the calculator pictured to the right, but no paper roll is visible on the Monroe UltimateX pictured to the left. Other than Monroe heavy-duty calculators, all calculators sport an external paper roll. Obviously that’s a physical design difference between Monroe calculators and all others. But get ready: we promised to share how that design difference should matter to you. So, here goes!

1. The print mechanism is the single most expensive component in any calculator.

It is also the component most apt to fail over time. And the single greatest cause of failure stems from having an external paper roll. When the printer fails, you can kiss your investment goodbye.

2. Here’s how it happens: the print mechanism is electro-mechanical, meaning there’s some lubrication involved in the various working parts.

This lubrication is on the hunt for paper particles and dust as it’s anxious to stop working so hard. It doesn’t need to do much hunting as the external paper roll collects dust, lint, and other particles floating around the office. As it feeds through the printer, the paper tape acts like a conveyor belt delivering all that debris to the lubrication. So long before the end of its useful life the printer fails and you’re stuck with buying a new calculator. Monroe knows this based upon decades of quality assurance testing, life testing components, and environmental testing along with repairing and maintaining end user owned units.

Why would Monroe be the only company to protect its customers from this known problem?

Hmm, could it be to lower the manufacturing cost?
It certainly requires less plastic to make an external roll unit.

Could it be to increase the number of units sold?
Possibly, so as the unit will fail faster when the paper roll is exposed.

Could it be to sell paper roll holders?
The external holders do break (and often) and in most cases run $10 to $20 a set. Nice way to make extra money from a calculator placement.

Okay, this is somewhat sarcastic, though in truth we’re the only company designing calculators to prolong their useful life and value to the end user.

3. Another common problem for the external paper roll is a cluttered desk, which can be a real consideration.

You see, if the paper roll can’t move (i.e. you shoved it against something on your desk), then instead of a nice crisp listing of printed entries, you wind up with a big black splotch! Reentering a long column of figures again is time-consuming, and wouldn’t have happened if the paper roll had been enclosed. So far that’s two benefits in your favor based upon the physical design of Monroe heavy-duty calculators. Now let’s also add a splash of practicality to the mix: how often do you have a spare paper roll or ribbon handy? Did I hear never? With the enclosure for the paper roll we even provide a storage compartment for an extra roll of paper and either or both ribbon cartridge and spooled ribbon. Sounds like we’re trying to make you more productive and eliminate wasted time, right?

4. The Monroe UltimateX is beautiful, but it looks bigger.

Won’t that take up more space on my desk? This is a common user question and the answer is very little. The real difference is visual and perceived rather than the less than ½” physical difference. Our eyes tend to stop looking past the end of the case and fail to take into consideration what’s hanging off the end. And remember, if the paper roll is enclosed you can place your calculator anywhere on your desk.

Well that’s just one of the physical design elements that set Monroe heavy-duty calculators apart from all others. Clearly you get the benefit of that design. We’ll cover others in later blogs, as well as speak to some of the awesome functional advantages.